The Story of my punches 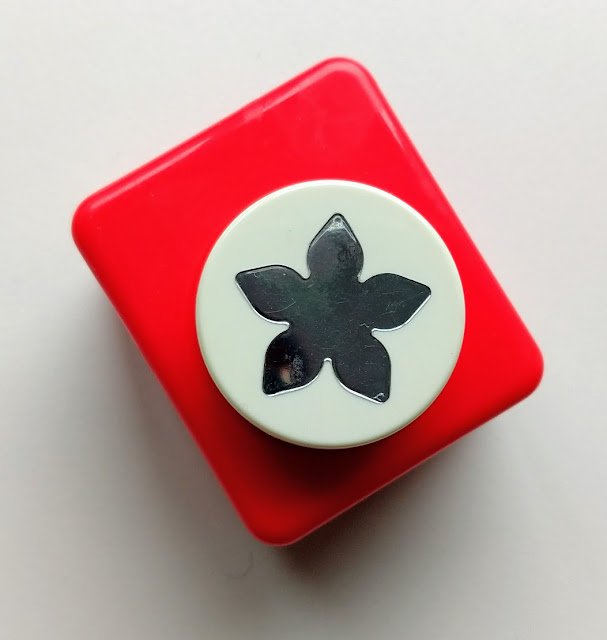 This was the first little punch I ever bought. It came from a shop called Kozo in Belfast and I loved it. I didn't have many craft supplies at the time and couldn't justify spending too much money on them so this little punch had to work hard. I used the flowers, the apertures, left them flat and twisted them etc! Eventually, I enjoyed using the punch so much that I bought some more....and some more! 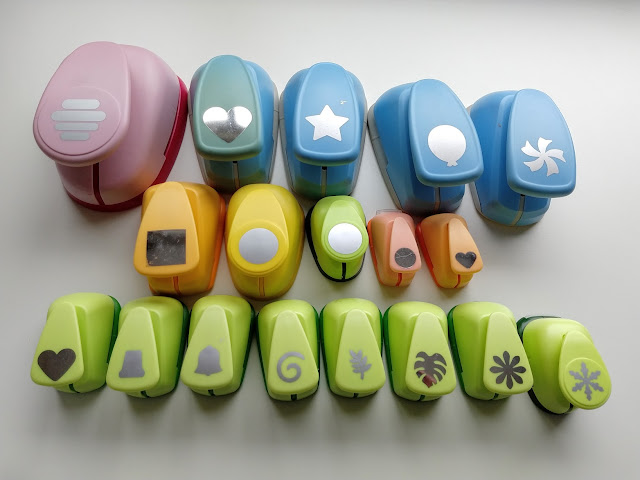 Some Woodware punches. I generally kept to basic shapes which could be adapted. The 3 different sized circle punches ion the centre of the photo are always beside me, even now :) 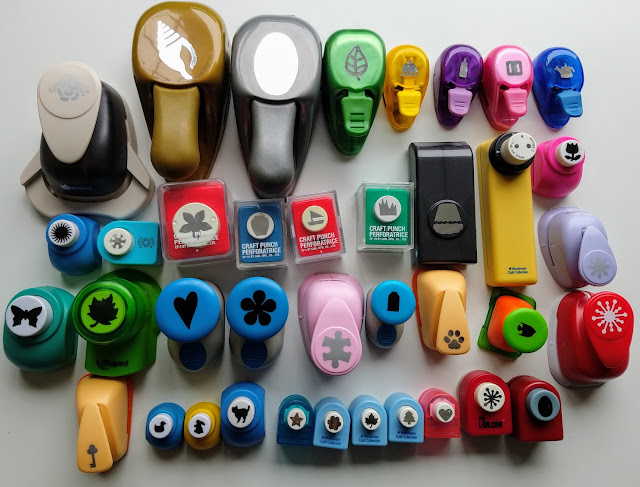 Some tiny Woodware punches and some very large lever punches. That large oval at the top is a very handy one! 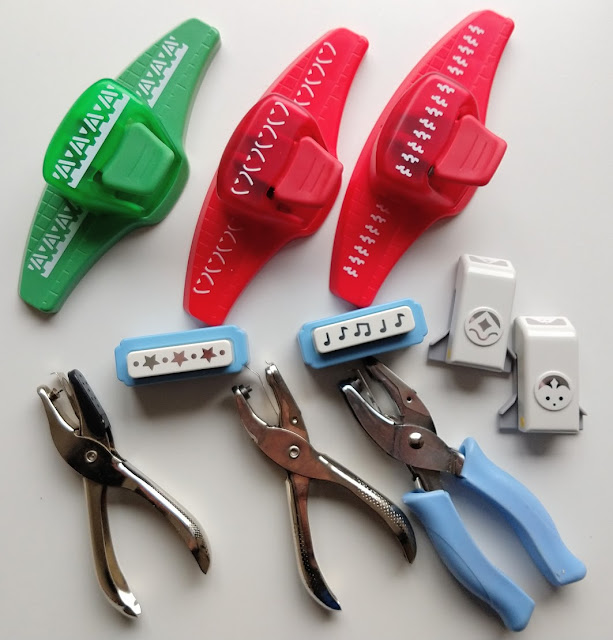 The border punches were a real treat for me -I loved threading ribbon through them and placing different coloured card behind them for different effects.
I mostly still use the hole punches at the bottom for tags but also used the waste as confetti. They work well with foam as you can see below. 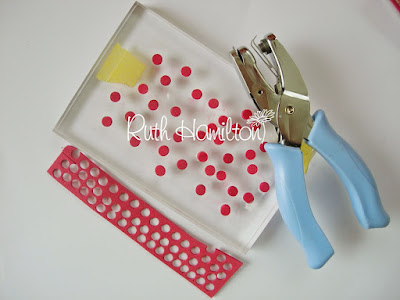 I punched the foam and glued temporarily to an acrylic block, 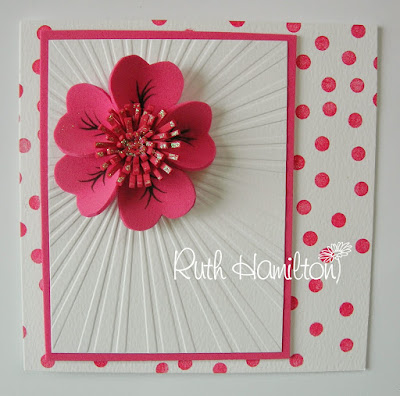 then used it as a stamp for the background. 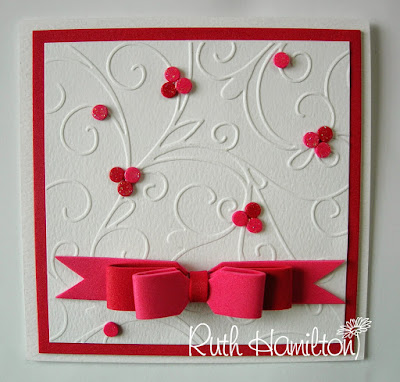 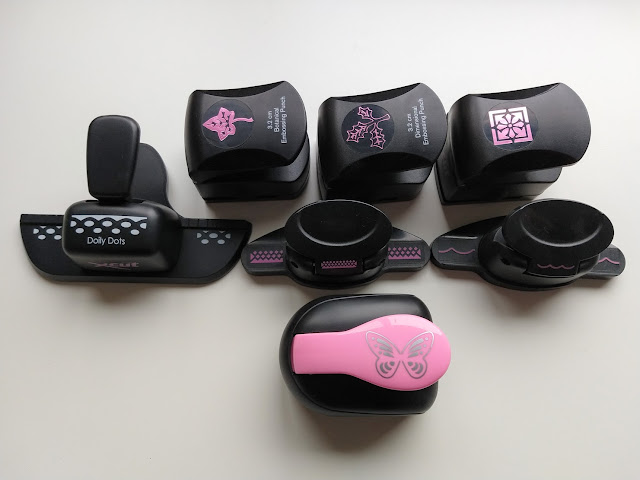 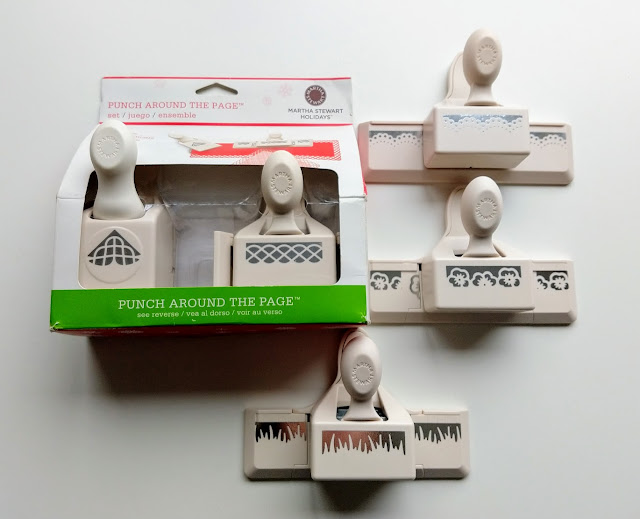 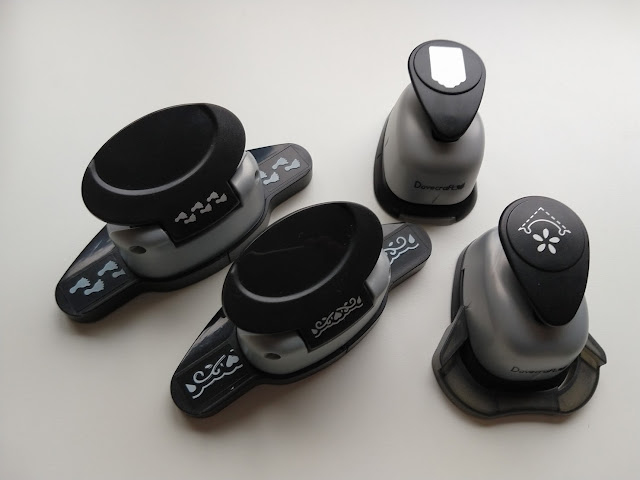 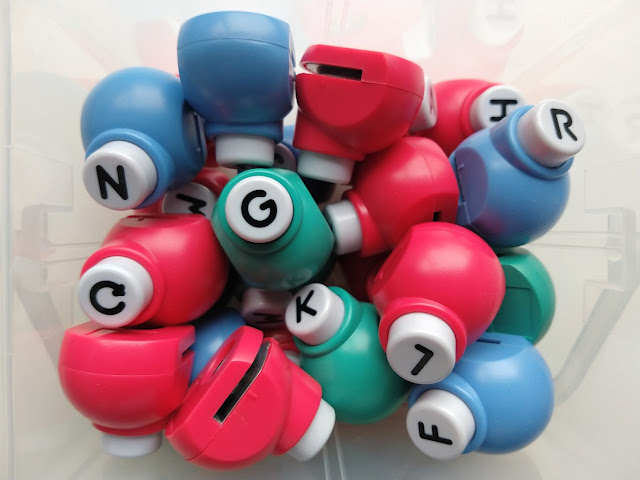 This little set of mini alphabet punches was used over and over again! I used the X as faux stitching on numerous projects. 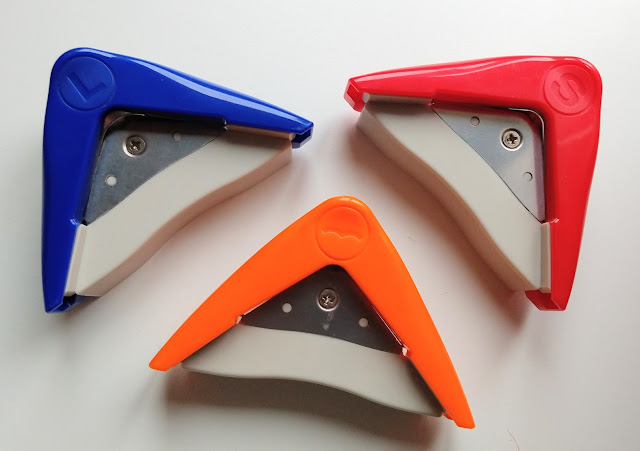 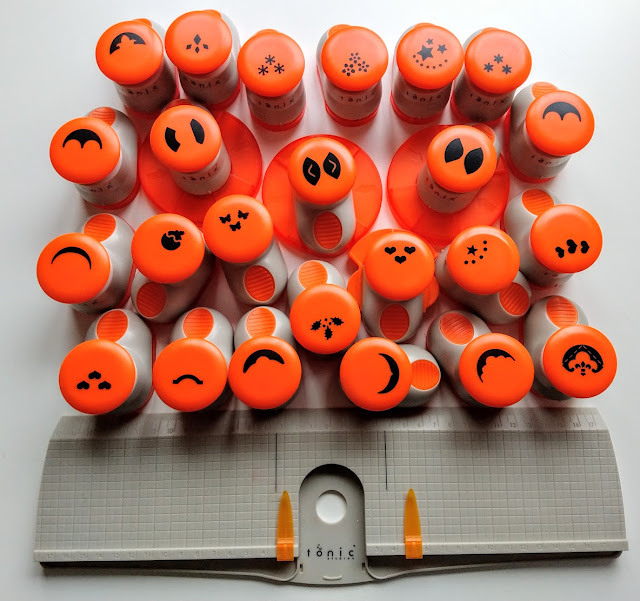 Now this is where it all changed course! I saw this Tonic Studios border system demonstrated at a show in Belfast, David bought them for me and I was hooked! 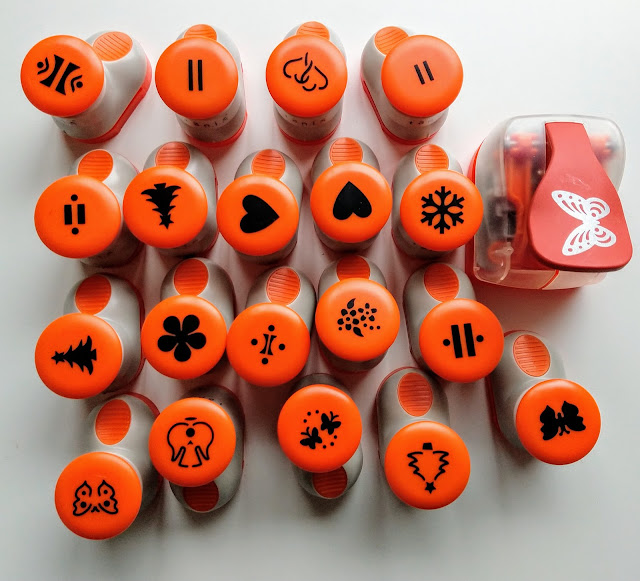 Some regular boot punches which can also be used with the border system. To the right is the most used punch of them all - the Intrica Butterfly! 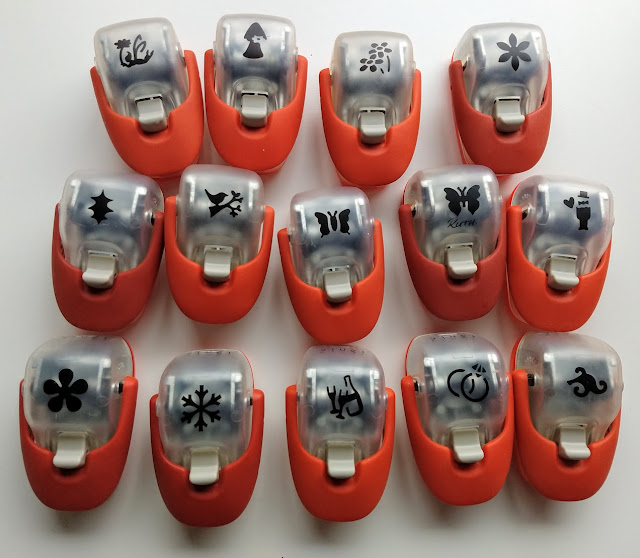 These are amazing geared punches. Back in the day when Tonic Studios was only making tools and punches, these geared punches were developed and could punch through cardstock of up to 400gsm! 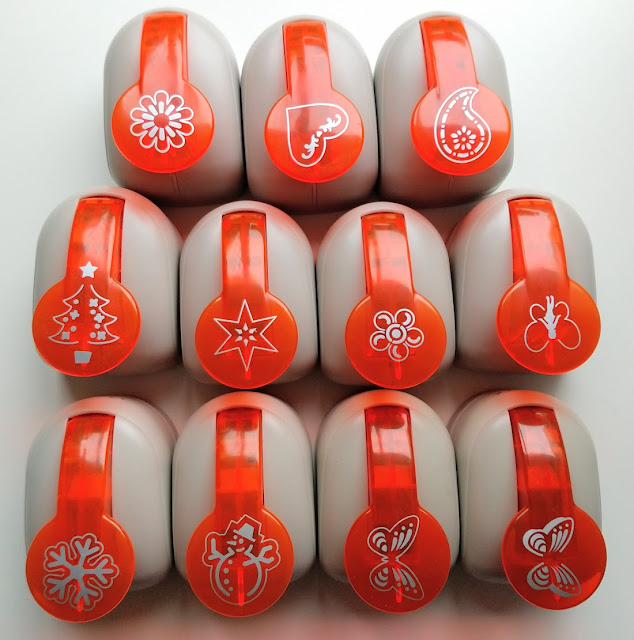 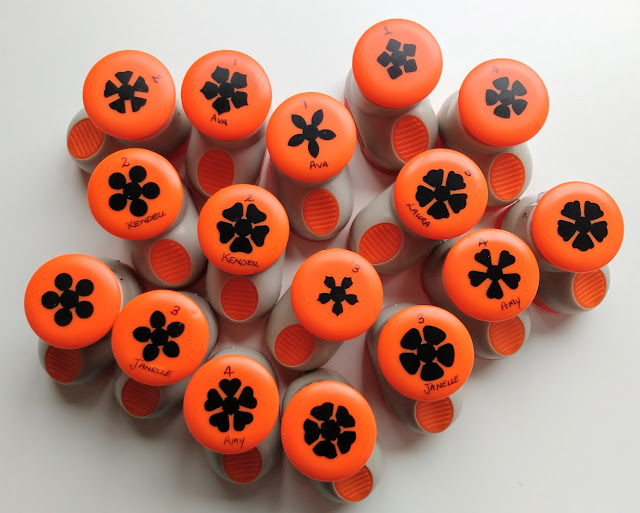 Petal Pairs, designed by Susan Niner Janes for Tonic Studios. These had interlocking petals and could be layered up to great effect. 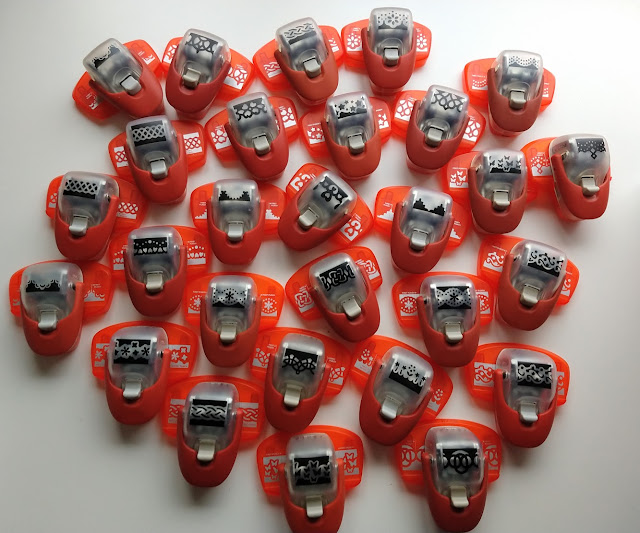 These were once the staple of all my cards. Geared border punches! Some were border and some strip punches and worked so well together. There's even a couple in this pile which were never actually mass produced. I was given them to try when I was demoing at a trade show for Tonic Studios but they never became available to the public. 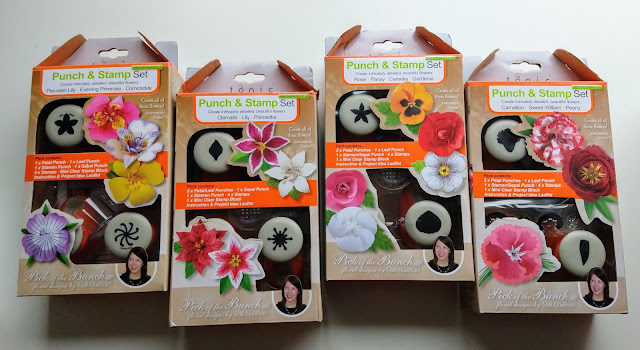 I had so much fun designing these four sets of punches, complete with coordinating stamps and a little stamping cylinder. I must have made thousands of flowers with these and loved demonstrating them around the country :) 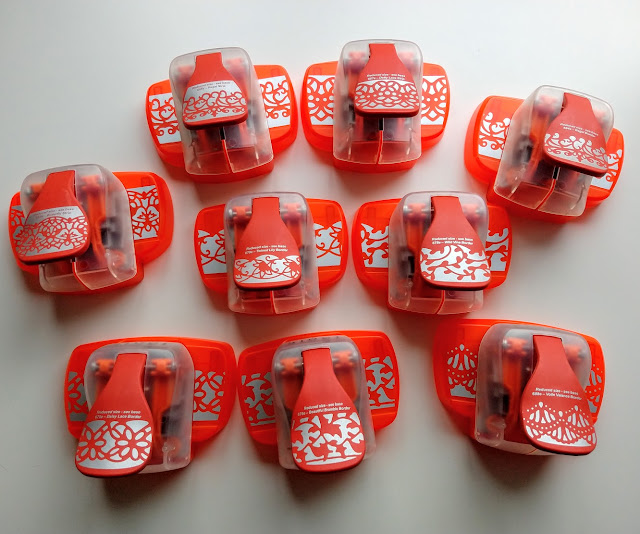 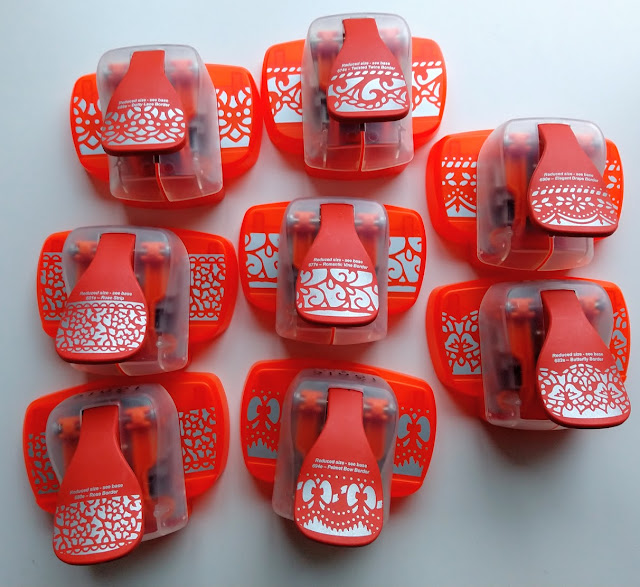 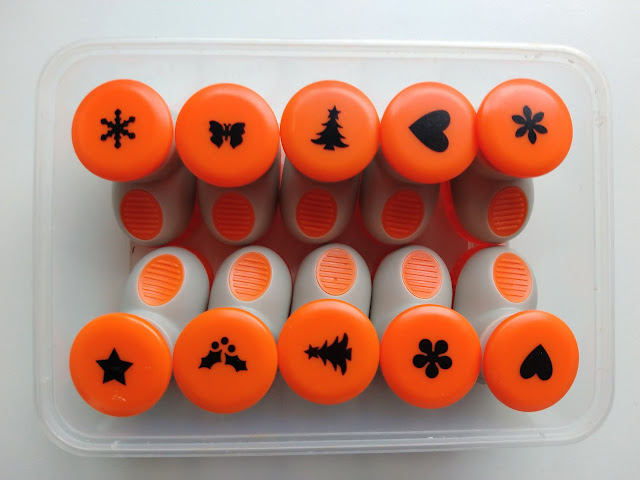 Mini punches which are always in use. I keep them handy in a little takeaway container. 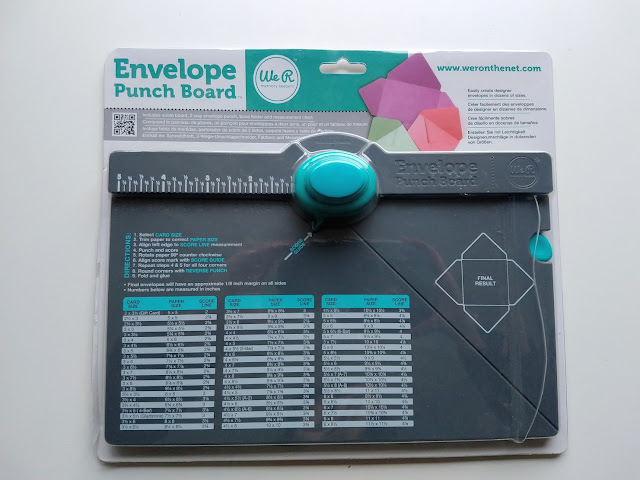 The last one I bought. It seemed like everyone had this or needed it so I treated myself but only used it once or twice - unlike all my other punches :). By this stage I had moved on to using dies and only really used my smaller punches with them.
Posted by Ruth at 18:49