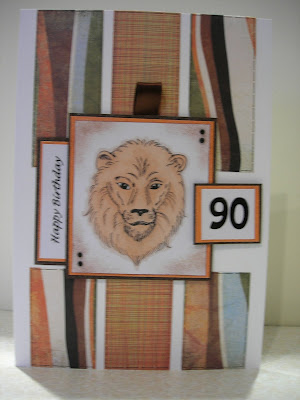 Have you ever made a card in a rush and didn't even know how it would look in the end? Well, this one was a tall order at the last minute!
The card was for a 90 year old man who has spent most of his life in Africa..so,here it is. The photo was taken as the card was about to be written and taken away so please don't even think about zooming in as it's even more blurry then!
Anyhow,it was great to have a sketch to work to. I followed Mojo Monday's layout and used some Basic Grey papers very kindly sent to me by Martine. I was asked (or rather,told) to draw a lion on the card and this was my best attempt at it in the time given(my excuse anyhow!) so the papers were just fantastic with it. I kept it quite simple as I usualy do with a man's card and just hope it makes someone smile when they see it.
Posted by Ruth at 18:58